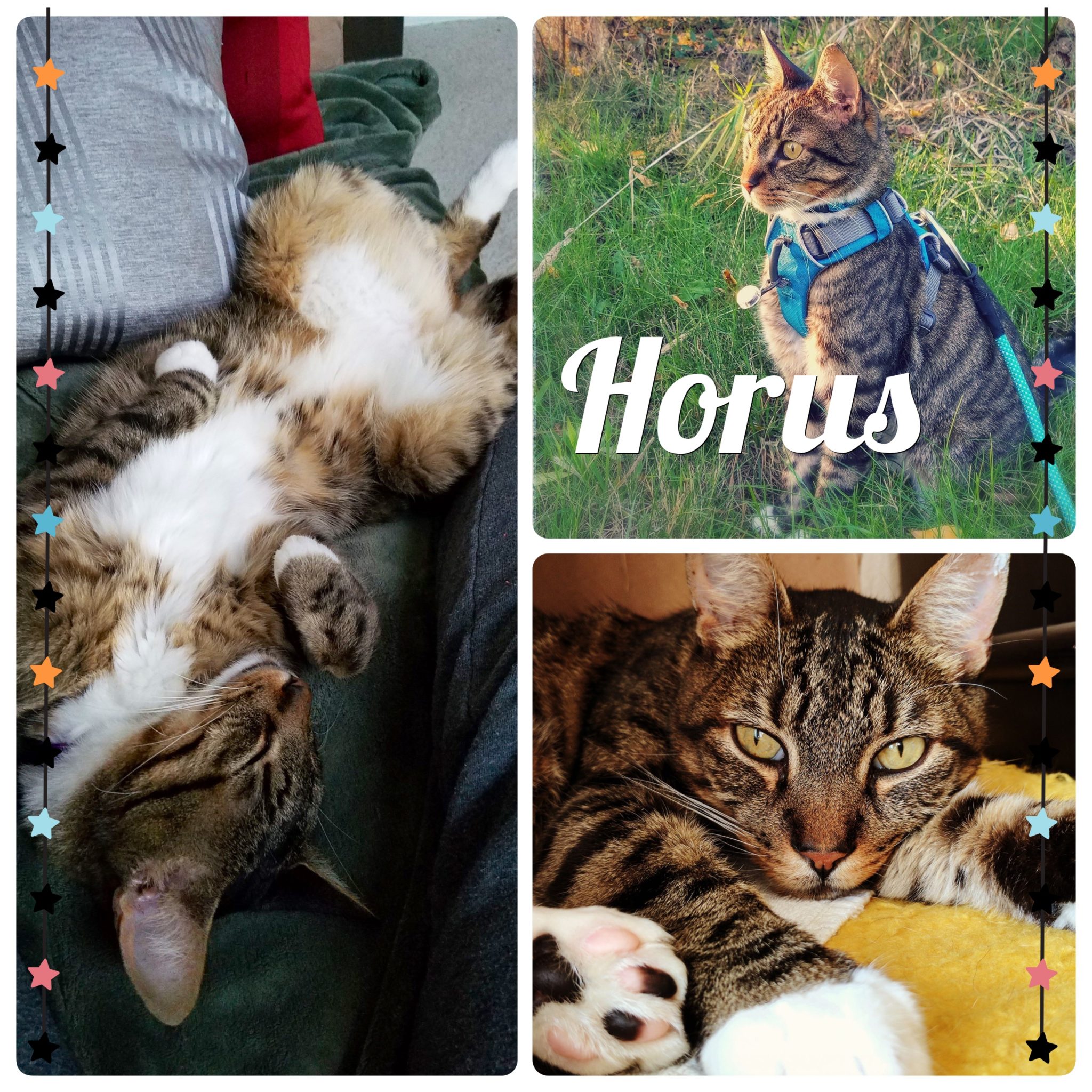 Marci has been a LIFE saver. This applies to not only my rescue Horus, but my relationship with my girlfriend, since he was starting to get between us and sleep. Mr. Horus (aka Meowsa Pants, for his constant meowing that started the day we picked him up from the adoption agency) is a very vocal and opinionated little dude. He will tell you EVERY thing that has happened throughout his day and by gosh you better be paying attention, lol!

To be fair, when we picked him up he immediately went back to the Cat Adoption Team before I could take him home and had a BB taken out of his left hip (thankfully more of a flesh wound than an actual damaging one). At that time they also took out 3 of his 4 canines (they said the teeth were bad from malnutrition). He would go back a month later and have his last one removed since it wasn’t healing correctly. So even I would be a bit nerved up and stressed with a new home and massive surgeries. We gave him time to adjust and all the good kitty juju’s we could muster, BUT it wasn’t enough.

Seven months later and Horus would still pace from one end of the house to the other, meowing loudly and incessantly from window to window throughout the entire night. They say sleep deprivation kills, and,well, it was about to claim a tabby as its next victim! After exhausting Google, vets and other kitty experts I decided, “why not, Jackson Galaxy seems to get things done when others have failed”, and so began my search for a cat behaviorist. Thankfully Marci is MUCH closer than Mr. Galaxy, and a heck of a lot more flexible and convenient. ?

Marci suggested that Horus (being a young cat, and quite masculine – despite being neutered!) was showing signs of territorial behaviors. I had been walking Horus on his leash around my complex (apartments gone to condos) and that was one of the first things to go. Clearly there are other cats around, and that is what he most likely was reacting too. Not only was the yowling at night becoming unbearable, but he was also having accidents near the front door (and yet the litter box is 2 feet from there!). In addition to her other recommendations, Marci also suggested clicker training (which is something I was already working on) to help stimulate him whilst the walks were taken away. He also is a high energy little guy, so play time is crucial in his winding down at night.

We went out, pretty much right after Marci left, and started working on implementing her recommendations. THAT NIGHT, he was already better. I slept for the first time since I had brought him home almost an entire night!!! Now I know what it’s like for first time parents, lol. We have been playing with him daily, and his tricks are coming along nicely! We have come, sit, and twirl almost down to a science! I’m now working on ‘fetch’. We shall see ?

Again, I can’t say enough good things about Marci and Feline Behavior Solutions!!! I finally have the cat I’ve wanted and knew he could be. He melted my heart at the adoption place when he came up to me and flopped and showed me his belly, now I can only imagine how much more love he and I will share for the rest of his life with me. ?